Can You Find It In Columbus? Paintings by Ellen Kandoian Sweeney

I see my current work as the truth bent to perfection. Set within a meticulously designed world of vanity, beauty, and abundant pattern, recent works evoke a carefully crafted stage rather than the happenstance of real life. Echoing fairy tales and Dutch genre paintings of the 17th century, my paintings illustrate adolescent girls and young women 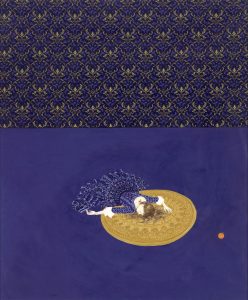 in scenes that play on Romantic notions such as the peril of curiosity, the potency of beauty, and the inevitable fall of innocence.  Despite their childlike references however, these works are meant to embody the prophetic perspective of an adult   looking backward to an overly romanticized, fictive past. As an adult, one can look   longingly at this world of innocence, and whether it existed or not, they have   always fallen from it: they have traded their naiveté for the role of a diviner. 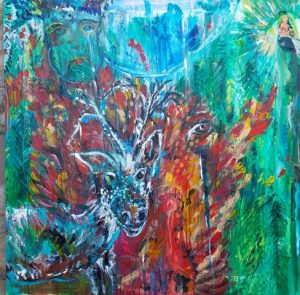 The predominant color of red in her paintings – every variation and every hue –represents the life, death and rebirth that Donna experienced following several intimate losses during a short period of time. Donna’s work as an art therapist on Indian Reservations and in hospice centers, as well as her Slovakian heritage, significantly influences The Primordial Language of Red.  Donna has been exhibiting fine art since the 1990s, currently in Columbus and Chicago, and is a practicing art therapist.

Paths that Lead up the Road, Around the Corner or Tempt to Linger for a While – Paintings by Evelyn Burke 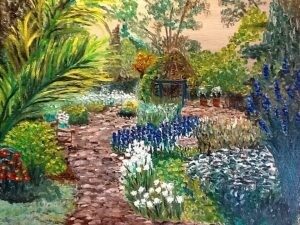